As the Kensington Historical Society (KHS) celebrates its 45th Anniversary, we review the goals that existed when the Society was formed in 1977. Those goals were: “to safeguard the heritage of Kensington by preserving a record of its culture and architecture, by supporting preservation efforts, by promoting its historic district, and by encouraging restoration of its historic sites and structures.” They remain our goals today.

Society efforts, in the end, resulted in a large part of the Town becoming an Historic District. There were many steps along the way. The year before the Society formed, the Maryland National Capital Park and Planning Commission (MNCPPC) published a “Locational Atlas and Index of Historic Sites in Montgomery County” with the Town of Kensington listed as site 31-6.

In 1979, KHS and the University of Maryland School of Architecture co-operated in a “Kensington Preservation Study.” This study detailed the homes and businesses that retained a large cohesive area exemplifying a Victorian-era Garden community. The Kensington Historical Society applied to the Maryland Historic Trust for nomination to be placed on the National Register of Historic Places (U.S. Dept. of Interior). The District was placed on the National Register in 1980. In 1983, the Society conducted a survey of owners, both current residents and absentee, in the Kensington Historic District concerning the desirability of applying for inclusion on the Montgomery County’s Master Plan for Historic Preservation. The outcome was supportive as was a petition for inclusion on the Master Plan, which was circulated by the Montgomery County Historic Preservation Commission (HPC). The district was placed under that County Ordinance (24A) in 1986. At that time, a large portion of north Kensington could not be added since the historic homes were not contiguous and did not conform with the “Victorian Garden” portion. In 1986, the Kensington Historic District was approved by the County, which put it under the protection of Montgomery County law.

The fact that the Kensington Historic District was designated helps to ensure that the historic character of much of the town will survive. The past cultural and social life of Kensington, as well as its built resources and open spaces, has great meaning to its residents and neighbors. 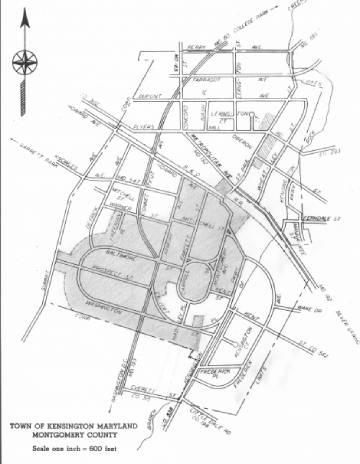 Visit the Archives by appointment.